Which Social Network Will Be the Next To Shutdown?

By Writer Writer Chicken Dinner Research Apr 09, 2019 No Comments on Which Social Network Will Be the Next To Shutdown?

In the wake of Google+’s ultimate demise, MySpace deleting 13 years of user data, and amidst the carnage and chaos that is the on-going highly questionable handling of privacy and security by Facebook the question arises, is social media dying? And if so, who is next to get the ax like Goolge+ and shut down completely?

This study found that, according to Americans, MySpace is likely the next network to disappear from the web. Others Americans feel strongly might go are Snapchat, Facebook, TikTok, Tumblr, and Tagged.

Dr. Scott Cowley, a professor and social media researcher, asked his students at WMU this question and got the following results:

In honor of Google+ shutting down accounts this week, I surveyed my class about which social site will be the next to die. Results:

Here are those results broken down as a percentage of students in his class.

It seems clear from this that students in this particular WMU course are thinking Snapchat and Tik Tok have the best chance of being shutdown, even higher than MySpace which hasn’t been relevant since early 2006, SoundCloud which has gone nearly bankrupt, and Tumblr which just lost a large chunk of active users due to their pornography ban.

We were curious how the general population and those who work in the social media / digital marketing field felt about the same situation and sought to find out, which of the social media platforms do they think will be the next to shut down and how does that vary or align with what these WMU students thought? This data might be valuable to help gauge consumer trust in individual platforms or in social media as whole.

To answer this question we surveyed 129 Americans. Our sample pool came from Survey Monkey Audience, Twitter posts, and Facebook posts requesting targeted feedback from the digital marketing community since their participation was required. We did not use the same set of Social Media networks originally used by Dr. Scott Cowley and we asked the question a little differently than he did, which means comparing our study and his may not be apples to apples. 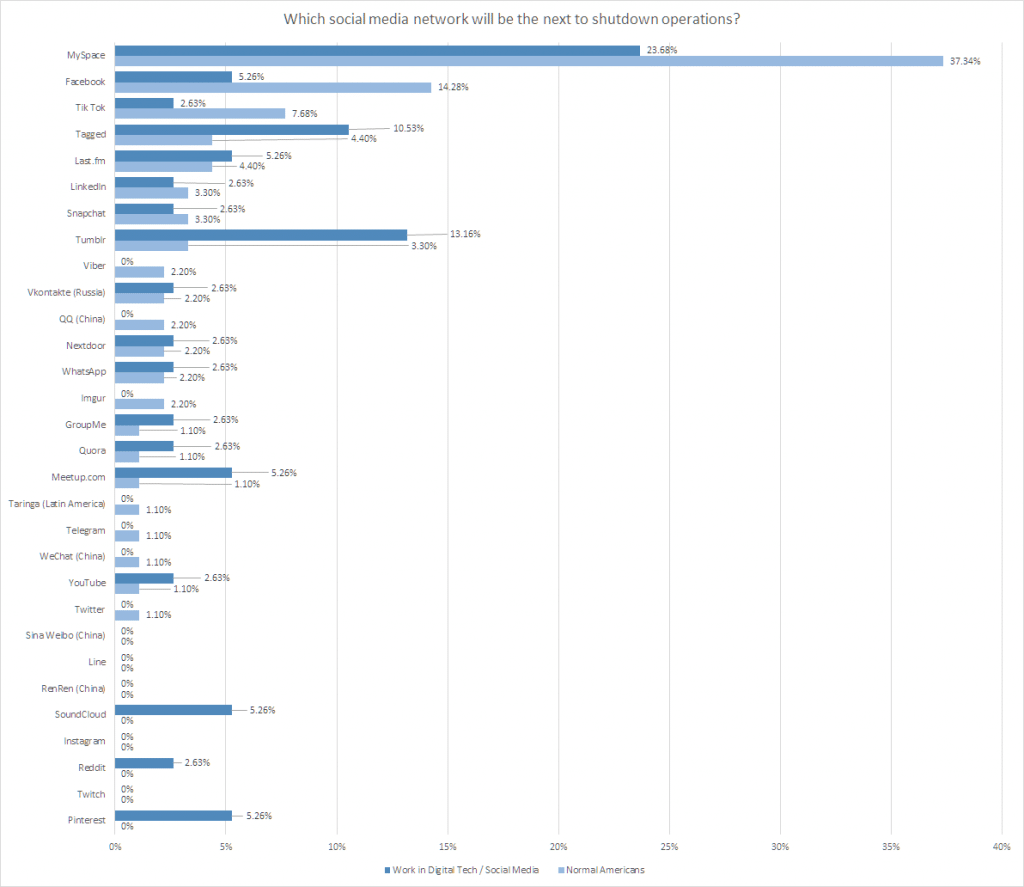 The two sides differ on the which social media network ranks #2 for most likely to shutdown next. Normal Americans tend to think that it will be Facebook with 14.28% voting that way and those in the industry believe it will be Tumblr with 13.16% voting for the Verizon owned network to be the next to go.

When we look at how Normal Americans and those actively working in the industry compare to Dr. Cowley’s Western Michigan University class we see a stark contrast. This could be caused by any number of factors, including that we offered more social networks to choose from and asked the question a little differently. It may also highlight how youth in Michigan feel about social media or even just youth on that specific campus. 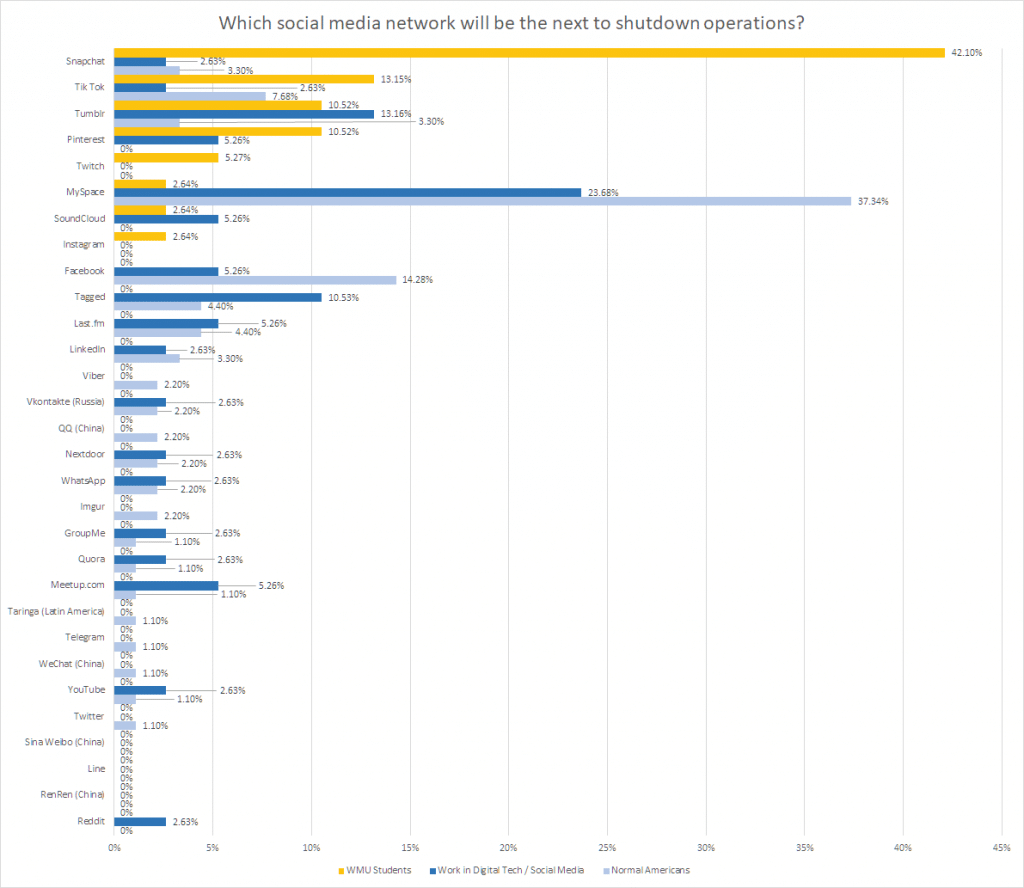 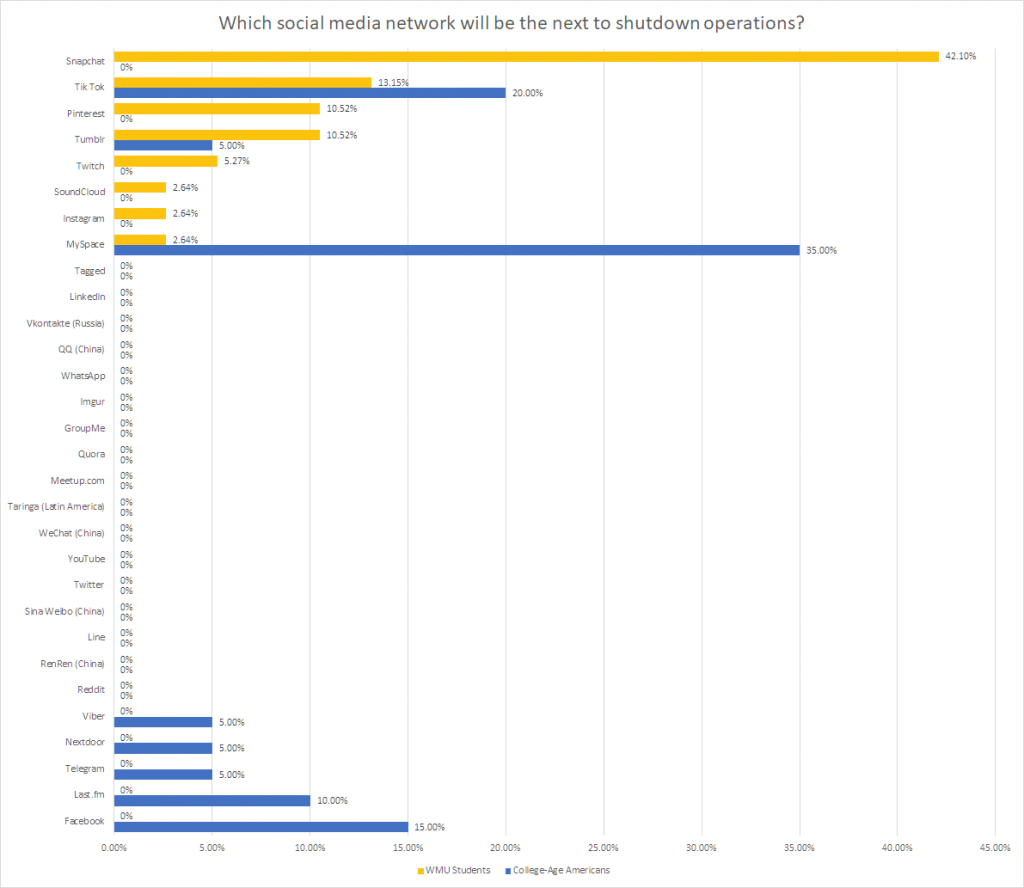 Here’s the full list of who Normal Americans believe will be the next social media network to shutdown.

Here’s the full list of who those that work in a field closely related to social media or at a social media network think will be the next one to shutdown completely.

And for fun if we decided to combine the two studies (even though we shouldn’t due to their differences) to get a meta analysis of which social media platform Americans think will be the next to shutdown, this is what we get. 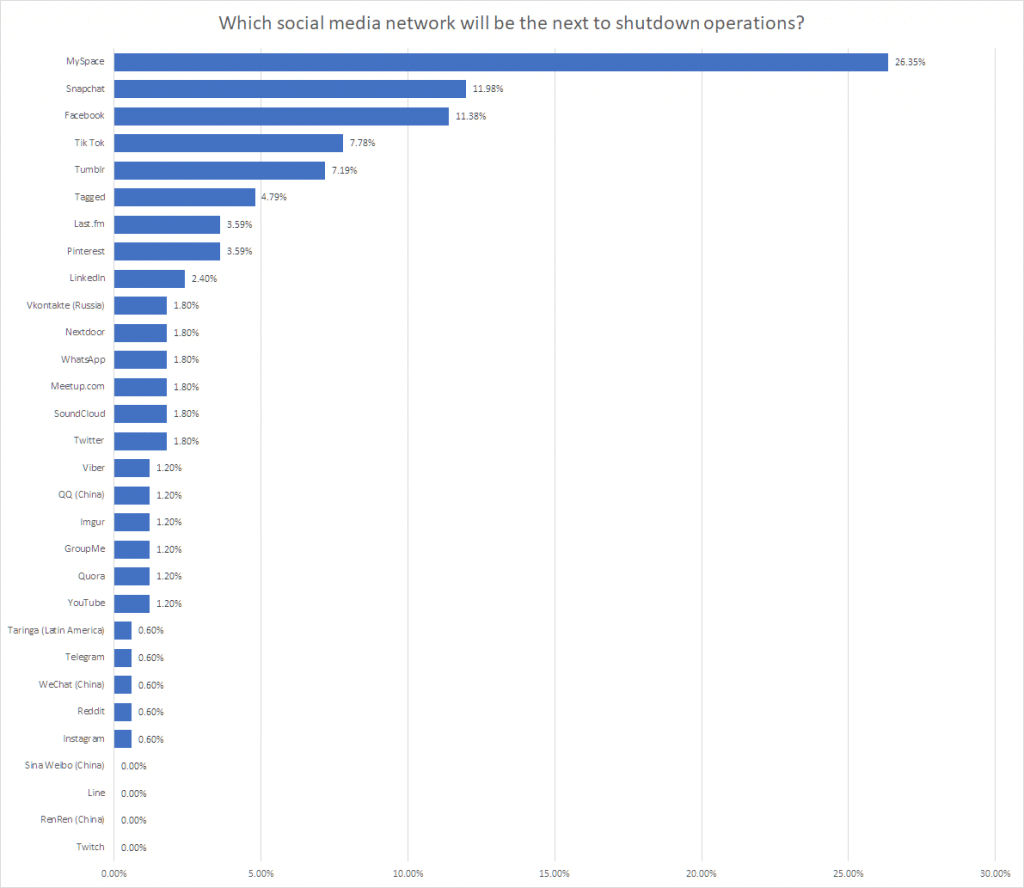 This study has a margin of error of 8.60% at a 95% confidence level. This would assume that Americans are good at guessing which businesses will do well, however, there is no previous evidence that this is the case and examples like the stock market and sports books might show just how bad Americans can be at picking winners and losers.

Participants in the study were not give a choice, they had to select one of the social media networks listed. There was no ‘other box’ and no way to provide an explanation for their selection.

A large volume of participants came via Survey Monkey’s Audience which are paid for their participation. Incentivizing survey participants without full access to their previous survey taking history could allow for ‘professional respondents’ or for untruthful answers which would skew the data.

To ascertain if they worked in a related field we asked respondents to self-report what they did for a living. Those not in a related field were given the option “Other Industry”. They were not allowed to explain their job or industry which could lead errors in assigning data leading to skewing.